Boys are weird, or maybe it was the time of day

After a fairly insane dinner--I got the seafood sampler with blackened salmon, a crab cake, a skewer of grilled spiced shrimp, rice, and french fries in lieu of cole slaw, but I also partook of nachos, a Southwest eggroll, and a baby back rib: the meal was all kinds of awesome--I headed into the mall to look for a camera neck strap for my dad's birthday next week.

I was trucking down a main aisle in Target, heading for the camera department, when a young guy stood up from the endcap he was working on and said, "Can I help you find anything?"

Surprised by his helpfulness, I slowed to a stop in front of him and said, "Uh, yeah. I'm looking for a neck strap for a digital camera."

"I can show you where that is." His voice was eager and borderline too high.

He lead me to the accessory shelves in the camera department and handed the neck strap option they had to me. I said, "Thanks," dismissing him so I could peruse the package and shelves.

I didn't think it was what my dad had in mind, so I walked down to Best Buy. A woman speaking Spanish into a cell phone and two men were in front of the camera accessories. I thought I recognized one word she said since it was similar to Italian, but the rest was a blur of phonetics. I spotted a neck strap in front of the men, reached over to pull it off the rack, and then stepped around them.

One or both of the men said some things in Spanish to the woman. She must be off the phone, I thought to myself. Then they exchanged some sentences in English which caught me off-guard. The man standing next to me worked for the store, I realized. The Spanish-speaking couple nodded to him and then walked away.

He turned to me and said, "Can I help you find anything?"

With the neck strap in hand, I said, "Is this the only kind of neck strap you have?"

He looked at the rack for a moment and then said, "Yes, that's it."

Not five seconds later, another guy in a blue polo--he looked like a frat boy--walked up to me and said, "Can I help you with anything?"

Maybe their attentiveness can be chalked up to being after dinner staff. I'm more accustomed to the staff that vanishes when they hear the footsteps of customers, or the ones who refuse to look up from what they're doing. Or maybe the guys from this evening were all extroverts. 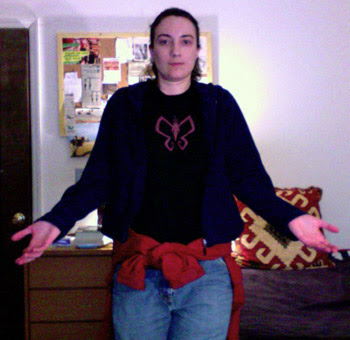 Because I don't see how this ensemble would attract that kind of attentiveness.
Posted by Claire at 9:15 PM