If your vote didn't matter, Republicans wouldn't spend so much time suppressing voter access and rigging the system in their favor.

Vote for Democrats all the way down your ballot Tuesday Nov. 8 or Vote Early!

Some things at stake in this midterm election:

Do you want free and fair elections? Vote for Democrats.

There are election-denying Republicans running for Secretary of State in several states in which that office controls how elections are run. (Clearly they believe in elections enough to want to run for office so they can control election outcomes.)

Do you want free and fair elections? Vote for Democrats.

Do you want to get the money *you* paid into Social Security back when you're older? Vote for Democrats.

Do you believe women have the right the make decisions regarding their own bodies without interference from government? Do you believe rape victims and women with life threatening pregnancies deserve access to abortion health care? Vote for Democrats.

If you don't want to go back to banned interracial marriages and banned gay marriages, Vote for Democrats.

Republicans don't believe the right to privacy is included in The Constitution. That's how they overturned Roe v. Wade and have their sites set on birth control and marriage rights next. They will keep eroding our rights. To protect your right to privacy, Vote for Democrats.

Your Vote Matters and How You Vote Matters. This midterm election will greatly impact whether we have free and fair elections in 2024 and going forward.

Democracy is not bully people into changing results when you lose. Democracy is not throw out the votes of people who vote against you or disenfranchise them before they can even cast their ballots.

Get Ready to Vote Blue

Make sure you:
All our rights depend on it: voting, reproductive, marriage, social security, privacy…
#VoteBlue!

Posted by Claire at 8:36 PM No comments:

Handwritten Wordle Notes From Games Past

My parents and I compare notes on our Wordle play. When I've taken more guesses than I can easily remember or I'm distracted, I write down the words I used. Yesterday I filled in the last of the roughly 2" by 2.5" piece of paper I'd been using.

Vertical running words and other sections which do not fit Wordle parameters are stray solutions to Letter Boxed. 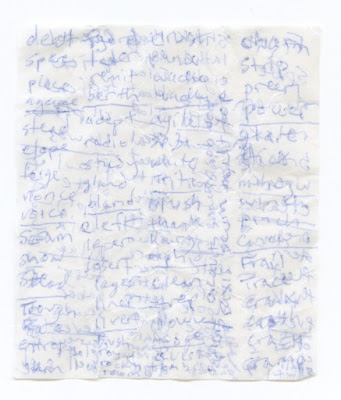 It's messy because I just wrote it for myself and because the scan pulled through words from the flip side.

All the games can be found at The New York Times Games Page and played for free. Enjoy!

17 years ago on TTaT: tip of the week

Posted by Claire at 7:58 PM No comments:

Recharge and Fight Back

Tonight's dance break: "Daft Punk" by Pentatonix.
Even though things are dire, when the GOP is outlawing our rights, find ways to recharge so you can fight back.
Because we must.
Register and vote for pro-choice Democrats who will end the filibuster.
Contact your senators, representative, and local officials and tell them you are pissed about the Supreme Court overruling Roe v. Wade, undermining gun control, and advancing an extremist right-wing agenda. Tell them to take action to protect your rights.
#VoteBlue #AbortionIsHealthcare
Posted by Claire at 8:27 PM

Today's sighting: Captain America. He was working for a subcontractor of the cable company and installing a new cable line for the new utility poles.
He was wearing the classic Captain America t-shirt with the shield on the front, a matte black hard hat that gave WW2 vibes, and skinny jeans.
I saw him pulling a line from the spool on the back of the truck past the driveway into the yard and then down the creek bank. From there he hurled it across to the other side. Then he walked downstream on the bank a bit and quickly hopped across the big junky rocks the construction crew left jutting out of the creek to the other side.
He was so agile. I'm only sorry I wasn't shooting video because I had no idea that was coming. Later it occurred to me that I couldn't think of a reason he couldn't have just walked across the bridge with the line, but, you know, Captain America.
A while later he was up in the bucket arm of the truck working on the line at the new pole in my yard. This time I was shooting photographs and video. I had the top half of the window down with my camera resting on it. He was maybe 50 feet away but he was clearly aware of me since we were about at eye level and he kept glancing over in my direction. I think I was making him nervous.
If I were an extrovert or maybe if I hadn't felt like I'd lose my voice, I would've yelled, "Hey, Captain America! Thank you!" I suppose I could've waved, but ultimately I didn't want to interrupt his work.
I was just waiting for this cool machine they attach to the line to spin down to the next pole. I think it wraps the cable line around the metal wire line he'd already installed. Once I had that shot, I closed the window and went back to my workout.
He and his partner, Bucky?, who mainly did work on the ground and drove the truck left around lunchtime.
I thought they'd come back after to finish switching over to the new line and removing the temp line but they didn't return. My guess is the actual cable company will come back for that part of the job. We'll see.
In any case, Thank you for your work, Captain America!

10 years ago on TTaT: Temporal Transportation

Posted by Claire at 7:40 PM No comments:

When the Sandy Hook Elementary School shooting happened nearly 10 years ago, I thought it would be the catalyst for gun reform. I was wrong. With hundreds of mass shootings in the US since including one at Robb Elementary School in Uvalde, Texas this week, it's clear there will be no change until politicians in the pockets of gun lobbyists are voted out of office.

Remember in November and for every local election or primary before then and vote accordingly.

Make sure you are registered to vote now. Call and/or email your senators and representative and tell them you want sensible gun control laws.

17 years ago on TTaT: Geek? Well, maybe according to some...

If you are going to help Dad move something heavy again:

a) Do it by yourself if you can, or

b) If you can't, go over where and how the item will be moved very clearly and very specifically before you lift anything.

Mom was getting a new chair delivered, so I offered to help Dad move her old one out of the way after lunch. Though it's not really big, it's a recliner that both rocks and swivels. The thing is a heavy beast and really unwieldy to move.

Dad finished lunch before me and disappeared. I finished a few minutes later, waited a bit, and decided to see if I could forge ahead without him.

I can test out whether I can lift/move something without injuring myself, but Mom was worried and went looking for Dad.

While she was gone, I discovered I could stand behind the chair and tip it back so it was resting on its circular base. Then it rolled sideways a short distance. It felt like a brilliant discovery.

Mind you, it's probably not good for the chair, but I knew she didn't plan to keep it. I was also a little concerned about all the concentrated weight rolling across the rug, but it looked okay, so I kept going.

I moved it across the room, about ten feet, by myself until I was nearing the edge of the rug. My angle was getting off for final placement and I realized it would be in the way when her chair got delivered.

Had I had a few more minutes to myself, I would've realized I could swivel the chair when it was resting normally on the ground to change direction when it was tipped back. However, Mom arrived with Dad in tow berating him for not helping me.

He didn't take it well and blew it off talking about what he'd wanted to do outside but ultimately looked at me and said, "I forgot."

The chair still needed to be moved a couple feet off the rug onto the hardwood floor. I didn't think my rolling method would be good on that surface.

Dad was just standing motionless in the middle of the room so I said, "Are you going to help or what?"

He walked over and got on the right side of the chair across from me. The only useful place to grip it was quite low, just a few inches from the ground. When we were both set, we lifted.

I lifted a couple inches thinking we'd shift it back from there while he stood up as if we were going to walk several feet. So I had to stand up while not braced for it. We moved it like a foot and put it down.

The chair still needed to go further back. He wanted to put it all the way next to the wall and went into in charge mode and stood behind the chair.

"Because you're standing behind it," Mom interjected.

I'm sure he thought he could, as he calls it, "jackass it around." I'd already given that a tentative try and the nature of the heavy round base prevents it.

He came back to the side opposite me.

"I don't want to stand up with it. I just want to lift it a couple inches and move it back," I clarified while gesturing.

We moved it without incident this time.

For all their concern I would injure myself moving it by myself, it was that first uneven lift with him that gave me a mild strain to my lower back.

It's not thrown out, but I can feel it and any wrong move, imperfect form lift or reach could trigger it. I'm trying to take it easy today, but I needed to do laundry and scrub my tub. Not ideal. I could've put it off, but having to change my routine would've irked me. I am delaying other things I would've done today.

So anyway, note to self: maybe next time don't offer to help and if they ask, tell them to ask the strong delivery guys to do it. At least they got a nice tip!

Posted by Claire at 4:30 PM No comments: