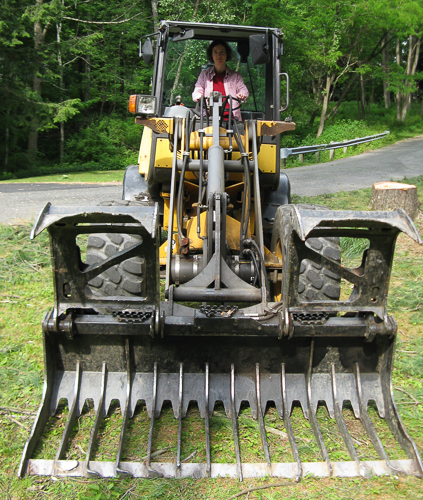 Email ThisBlogThis!Share to TwitterShare to FacebookShare to Pinterest
categories: snapshots

Went to a cool outdoor sculpture show this week and took loads of photographs (448) there and elsewhere. Also 42 videos. I have not finished looking through them all but thus far have culled 96 photos and 13 videos.

Wrote description for Prussian Blue Watercolor Curves and added it to a variety of products in my shop:

Updated my Calendars folder some in preparation for 2017.


10 years ago on TTaT: Latest guilty pleasure; Saturday, meme? Sure. (I've done a few more of these and forgotten I'd already done a few others. :)
Posted by Claire at 12:01 AM No comments:

Officially met Rosco, the big black dog who lives at the top of the street. He pulled at his leash and his owner said he wanted to meet us. She asked if it was OK first and assured us he was friendly before taking him off-leash. My companion had said, "Sure," before I'd had a chance to really think about it.

Nonetheless, I appreciate the owner's good etiquette having had some bad dog experiences in my past. Rosco is, in fact, very friendly though he had his nose so far under my crotch I thought he wanted to play tunnel tag. I assured him that, yes, he could bowl me over if he wanted too. Fortunately, that wasn't his goal.

He walked over and gave me a low growl.

"It's OK, Roscoe, you know me," I said, holding out my hands in the dim light.

At last! Time to start rolling out the designs I've written about for so long.

First up (because I already had a description written for it), Red Geometric Painted Pattern:

Went back to early layer stages of another painted/digital design and finished it.

Worked on another design that I don't quite consider done. Tried to sort it but set it aside for now.

Took 4 photographs of an old painting of mine. Ditched 3.

Recently found in my parent's basement, I'd forgotten I'd done this painting. A little the worse for wear, but I don't think it hurts it overmuch. 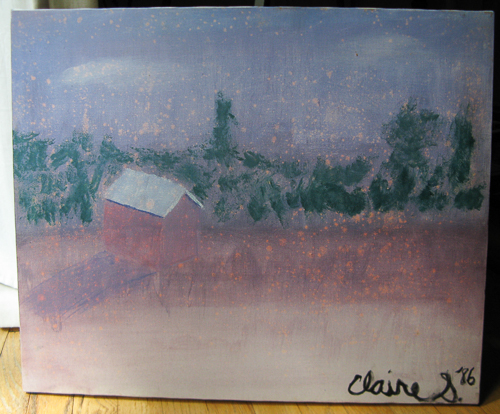 Early days of my life of art.

Email ThisBlogThis!Share to TwitterShare to FacebookShare to Pinterest
categories: life of art, snapshots

Heptathletes are a new favorite of mine after watching them in the Rio Olympics.

Their final event was a race. When they crossed the finish line, they collapsed to the track or doubled over having given it their all.

And then? They started congratulating each other, hugs and smiles. All of them having done their best over those two particular days and respecting each other for their efforts.

My favorite thing about this group of superb athletes (beyond their physical strength, stamina, and skill)? They took a collective bow, all of them lined up along the track.

To me, they demonstrated true Olympic spirit. Love it!


9 years ago on TTaT: Clear sky at last; Inadvisable, certainly
Posted by Claire at 4:23 PM No comments:

Life of Art SitRep #339 So close I can taste it

Finally put an ink cartridge into a calligraphy pen (the widest nib) and started sketching. Went ahead and inked my balloons, not perfect but done! That stage anyway. I can always smooth out my scan in Photoshop if it seems necessary.

Drew a series of images I'd been meaning to for a while.

Scanned all my latest creations.

Finished 3 watercolor/digital collages and made headway on a fourth though I may restart it from the beginning. It's not going quite how I'd like, uf.

Did some work on archive.

The Seen, The Heard, and The Unseen: a tale of Perseids

Though it was a couple days before the peak of the Perseid meteor shower, I decided to give it a shot last night since the forecast for the rest of the week was cloudy or rainy.

I scoped out the viewing possibilities beforehand and considered going to the back of the yard at the edge of the woods. Recently a bunch of trees had been cut down along the street so the sky is a bit more open.

Ultimately I settled for the upper deck because I didn't want to stumble through the gardening and figured it'd be buggier on the ground.

I leaned gently against the back railing and craned my neck to see over the house. In my right hand, I held a piece of cardboard to block the street light's glow.

Even if all I see if this, it's a gorgeous view.

After about ten minutes, I saw a small streak of light and smiled.

I decided to try my luck and patiently waited for another.

The second was a bit bigger, a good meteor sighting in my mind.

The crazy owl that lives in my neighborhood started hooting off to my left. "Hooting" doesn't do it justice. It's not the low melodic sound people imitate. This owl is more like one of those noise-makers that undulates up and down in pitch kind of musically. Also loud.

Part of me felt like calling back to it, but the last thing I needed was an owl in my face, so I kept quiet and watched the sky.

A third small meteor whizzed past. I almost missed it because it disappeared below the cardboard I was holding. That one was really low in the sky. I lowered my cardboard flag to the tree level and kept watching the sky.

The owl was quiet again.

I heard rustling in the woods behind me. Old dry leaves crunching. Something big.

Even though I was on the upper deck, it was unnerving hearing something behind me that I couldn't see. Having recently seen one in the neighborhood, all I could think was BEAR.

I was really glad I hadn't gone into the yard by the woods for a broader sky view. The rustling would've freaked me the eff out if I'd been down there. I was unsettled enough as it was.

Though I tried to keep my gaze skyward, the sounds from the woods continued to pull my attention away. After a few minutes, I gave up and went in.

Three meteors and not getting eaten, that'll do, that'll do just fine.

The Perseid meteor shower peaks this week on Thursday night/early Friday morning. Should be best after the moon sets, around 1 AM. Check your location for a more specific time.

The forecast is kind of sketchy here for Thursday, so I'm going to take a stab at it tonight since it's supposed to be clear and the moon also sets a bit earlier.

Driving home after dinner, we took the back way to see the animals. Not everyone was out, but I saw two pygmy goats, The Black & The Blonde (labs), a horse, and, oh yeah, a FRICKIN' BEAR!

It was a young black bear crossing the road in front of the car. For a second, I thought it was a really big dog, but as soon as the driver said, "Bear!" I knew he was right. Since the sun was still out, this was the best bear sighting I've had this year. As soon as the bear got to the other side of the street, it disappeared into the undergrowth. We weren't far from where I live, so I will keep an eye out for this young one.

For a place called "badlands," it sure was breathtaking. Finished adding my photograph Blue Mesa Badlands Desert Mountains to a variety of custom items in my shop:

Rescanned a couple painted backgrounds and post-processed all of them.

Worked on a couple watercolor composite patterns and finished one.

Revised my blank watercolor paper pattern for use in backgrounds since there'd been a glitch. Still have a couple more designs to fix.

Updated LOA file and others for end of month.