Email ThisBlogThis!Share to TwitterShare to FacebookShare to Pinterest
categories: life of art, photography

Before and After Photoshop

Let's start with "after" since I'm proud of it. If you've been following my weekly Life of Art posts, you know I've been picking up tidbits of Photoshop for ages, but in the past few months I've spent a lot more time learning the program.

I read all of Photoshop CS5: The Missing Manual and attended several Creative Live workshops on the program. Check out Photoshop CS5 Intensive with Lesa Snider, Dramatic Post-Production with David Nightingale, and Beyond Photography with Doug Landreth for great practical information as well as creative inspiration. Knowing what's possible makes a huge difference in how you view post-production.

If you would care to be amazed, visit David Nightingale's blog, Chromasia. It's a new favorite of mine. Just below the bottom right corner of each image is a link called "show the original." Hover your mouse over that to see how far he took the image in post. Flat lighting has never seemed so promising.

I'm excited to see how I can make my photography better with all I've learned. 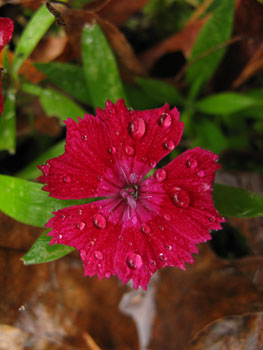 I used a number of layers to make adjustments to pieces of the image instead of the whole thing. Perhaps most importantly, I asked myself, "Wouldn't it be cool if...?" while looking at my photograph. Thank you for that, David Nightingale!


If you like my "after" version, you can check out the complete collection of Red Dianthus With Raindrops products in my Rocklawn Arts shop.


A year ago on TTaT: Observations in my parents' kitchen
Posted by Claire at 9:38 PM No comments:

Email ThisBlogThis!Share to TwitterShare to FacebookShare to Pinterest
categories: life of art, photography

So two and half weeks ago on a Friday, I got a message saying my follow-up appointment, that would've been today and was scheduled 3 months ago, had to be rescheduled.

Because they are making their billing system electronic.

And my new appointment is now 3 months later.

Seriously? WTF? Why does changing the billing system mean my appointment has to change?

Deep breath. At that point, I wasn't even sure I cared because I already kind of hate this office. It's not like any appointment I've had has been all that helpful, and I've had lots of stress and hassle dealing with them. Or not being able to deal with them, as is mostly the case.

I'd wanted to jump ship even before that, but that is its own hassle for a variety of reasons.

The following Monday was Columbus Day, I assumed they'd be closed, so I called Tuesday to change my appointment. I did have a few questions after all. The woman I spoke with couldn't find anything in the system but said Laurie would know and she'd be in at noon. She told me to leave a message and assured me Laurie would call me back. I already knew how this would go, but played along.

On Thursday, still having heard nothing, I called back. Laurie answered and when I identified myself, she was all, "Hi, Claire!" Yeah, whatever. I explained the appointment thing and she said, "Oh, I probably did that." Uh, thanks a lot. Apparently, they've rescheduled a lot of people, so at least I'm not the only one? (*cough*clusterfuck*cough*)

She found me a new appointment for November 18 and all was well.

When I answered the phone, I recognized the voice of the woman who'd left the first message, a distinctive New Yorker's accent. "Your appointment on November 18? We need to reschedule that because the doctor's going to be out and we're upgrading our scheduling system in November."

Still not getting why that affects existing appointments.

Almost back to where they started.

"Do you have anything sooner than that?"

"No, we can't see anything in the system."

"Yes, we can put you on a cancellation list."

"When is this going to be sorted out?"

"Do you have anything in the afternoon?"

"No, we can put you on a cancellation list."


4 years ago on TTaT: A smirk of recognition
Posted by Claire at 11:33 PM No comments:


A beautiful hardbound collection of stories about slayers and vampires within the universe of Buffy the Vampire Slayer. (It even has a red ribbon for a built-in bookmark.) Though there are familiar faces from the television series in the book, most of the stories are set throughout different periods of history. Some reveal cool background for the featured TV characters though, and there are even a few stories set during Buffy the Vampire Slayer: Season Eight.

Joss Whedon wrote several of the stories, the rest by other writers from the show and elsewhere. The art is also done by a number of people which gives a broad spectrum of illustration styles to check out. I really enjoyed the variety of art.

Definitely a good gift for a Buffy fan who also enjoys graphic novels.


A year ago on TTaT: My first calendar, huzzah!
Posted by Claire at 8:15 PM No comments:

Email ThisBlogThis!Share to TwitterShare to FacebookShare to Pinterest
categories: books, film and tv

The PreHistory of The Far Side: A 10th Anniversary Exhibit!

41. The PreHistory of The Far Side: : A 10th Anniversary Exhibit by Gary Larson


The PreHistory of The Far Side is not just a large selection of The Far Side comics, Larson also describes his beginnings, including childhood drawings. I really enjoyed his comments on mistakes he and printers made, subtle variations to his comics, public reaction, and rejected cartoons.

It was great to revisit the cartoons I loved (and still love), and to see how many of those are also Larson's favorites.

It's an excellent book to distract you in waiting rooms or if you're stuck at the hospital for observation, because the comics are funny and outlandish in the best ways, and it's easy to stop or pick up at a moment's notice.

Highly recommended! (But if you find you don't like his humor, put it down and move on. It's not for everyone.)


A year ago on TTaT: Sheep farm revisited, part 2
Posted by Claire at 6:24 PM No comments:

Email ThisBlogThis!Share to TwitterShare to FacebookShare to Pinterest
categories: life of art, out and proud, photography 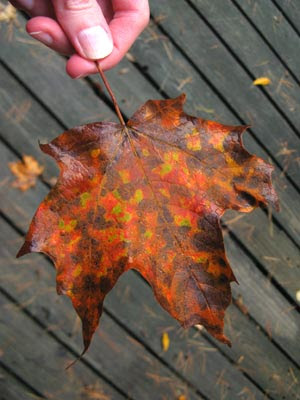 
A year ago on TTaT: Life of Art SitRep #36 So this is what distraction-free looks like
Posted by Claire at 9:51 PM No comments:

Email ThisBlogThis!Share to TwitterShare to FacebookShare to Pinterest
categories: snapshots

Life of Art SitRep #88 More than it looks like


A year ago on TTaT: Vinyl meets pollen
Posted by Claire at 12:01 AM 2 comments: 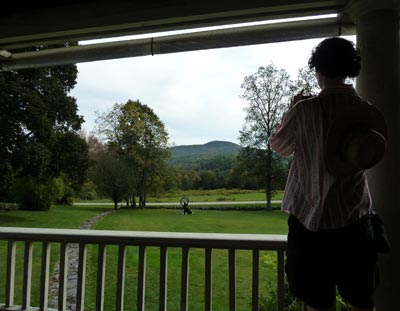 This image has been on my mind a lot lately. The near silhouette of me looking out. It's what came to mind when I thought of writing about Steve Jobs. I didn't expect to be so affected by news of his passing. Perhaps that–grief seems too strong–that sadness is selfish since it is his vision I will miss most. I so would have liked to see what he would've come up with in another 30 years.

Thank you for all of the beautiful, increasingly easy to use technology, Steve Jobs. It's made many things possible for me.

Now if you'll notice in the photograph, I'm not just looking out, I'm taking a photograph. This is acutely on my mind at present since I may need glasses. It has perhaps always been inevitable if you were to look at photographs of my entire spectacle wearing family, but I'm not ready for it. I am holding off for now because the focus disparity between my eyes is very mild, and I hope that now I'm not concerned it's a reaction to medication that it will mellow out. sigh. Also, I may have blown the prescription by not pressing my forehead far enough into the thing. Seemed like it was a sort of button, but I was just against it rather than pushing into it. Did I imagine that or is it common to those lens determining thingies?

In any case, paranoia aside, it may just be age which means it's only a matter of time.


A year ago on TTaT: Pinecones and Leaf
Posted by Claire at 10:01 AM 4 comments:

Life of Art SitRep #87 The bog

Play along in the comments with your own pursuits if you'd like. (That's where I'll cheer you on.)
*******
Been thinking quite a bit about what's useful and not useful with all this time-consuming description, tag, category wrangling of late. Even managed to let up a bit on the perfectionism which is fairly miraculous. At some point the descriptions are done enough and adding new products to the marketplace is more useful. Progress. (Still much more to be made though.)


A year ago on TTaT: Translucent Trillium
Posted by Claire at 12:29 AM No comments:

Meant to post something closer to my birthday a couple weeks ago, but, like most of this year, I've been preoccupied.

Nonetheless, here I am out for a round of birthday miniature golf. Despite vastly overestimating my golf prowess, I had a good time outside on a lovely day. 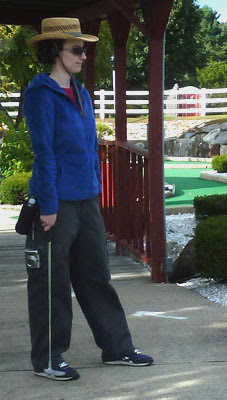 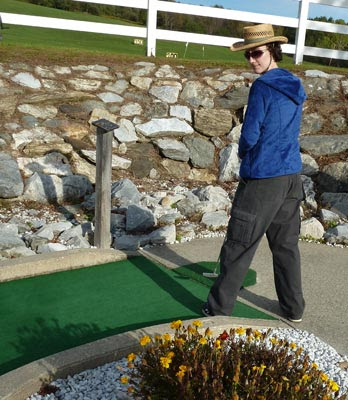