What a treat this multi-volume run of Birds of Prey by Gail Simone has been to read!

Start with Birds of Prey, Vol. 3: Of Like Minds to enjoy it from the beginning. It plays out with larger character story arcs across all those issues.

Female superheroes kicking ass with and without superpowers. But even better is their humor and developing/evolving friendships. Great read!


A year ago on TTaT: Life of Art SitRep #216 Wood Canvas and Organization

Posted by Claire at 9:13 PM No comments:

Felt like I made some headway this week, though at times due to technical issues, it was slow-going. Persistence won out in the end, huzzah!

Winnowed photograph archive a little. I'm getting behind on editing down my past shoots. Need to be more ruthless and just knock it out before it gets away from me.

Added the new design Black and White Geometric Equal Sign Pattern to items in my shop.

Read The Principles Of Pattern: For Craftsmen And Designers.

A year ago on TTaT: Biggest Bear Yet
Posted by Claire at 12:01 AM No comments:

Not to be confused with foxtrotting through the yard, though that would be cool to see too. Been too long since I've seen some quality ballroom dancing.

I'd call it spring, but there were big wet snowflakes pouring down on an already snow-covered yard as the fox scampered across.

More than once this winter, I've looked outside to see chipmunks and squirrels running to and fro with ease over the snow without breaking the surface. I've envied them.

Today I discovered that the snow has become so dense and packed that I too can walk on the surface of a foot of snow without sinking in. Aside from the pattern of my yaktrax, I barely left any impression.

"I'm a little chipmunk!" I exclaimed with glee as I walked over the snow.

"You know I don't know what I'm doing, right?" I said to my Mom as I stood next to her with a pair of scissors in my hand. "Remember you asked me to do this."

"Just go on and cut it," she replied.

She was sitting by the sliding glass doors with Dad's crazy do-it-yourself barber's cape on. It has neck and arm holes and curves up to catch the falling hair. She left her arms underneath and was not so patiently waiting for me to begin.

Cutting her hair had seemed straightforward in theory: her hair is straight and she just wanted a couple of inches cut off all the way around.

Years ago I had seen a segment on some television show which suggested using tape to create an even line across the hair to cut. I nixed the idea trusting my own sense of level more than my ability to get the tape to be level. Also she wanted the front angled down a bit longer, so straight across the whole thing wouldn't work anyway.

A pair of scissors had come with my Dad's shaving haircut kit, so I used those.

I pulled a section of hair forward and made my first grinding cut. Not very good scissors by a long shot. I immediately had misgivings and thought of quitting before I made things worse. "I'm not sure about this."

"It'll be fine. Just cut the same amount off all the way around."

Initially I figured I'd be conservative and just cut 1 inch off and then edge up if I needed to even it out, but I decided that could easily be the road to disaster, so I started by cutting off about two which was what she wanted.

I continued around the side and to the back. "You can't trash talk me to the hair stylist when you go to get this fixed."

"I won't. I'll just tell them I did it. Unless they say it looks good," Mom said.

"They won't say that," I interjected, shaking my head.

"Then I'll say my daughter cut it," she finished.

I did my best to make the back level, and continued around the other side.

I walked around in front of her and pulled two small sections of hair from either side of her face to compare their lengths. I gotten much more conservative on the last side I'd cut. Starting from the front, I cut around the side to even it out.

The back was a bit of a mess with the hair closer to her head sticking out longer than the outer hair. Dad's cape was beige so it didn't offer much contrast to her mostly white hair.

I trimmed the undercoat and then did the same for the sides. It could be worse, I thought to myself.

Mom got up and we lifted the cape over her head being careful not to spill the hair everywhere. She took it outside and shook it out.

She came back in and looked in a mirror, "This is good, Claire."

When she turned I saw a stray section of hair hanging lower on the back side. "Ooh, wait," I said, "Come back. There's more I need to cut."

I grabbed the cape and headed back to the living room. "Are we going to need that?" Mom asked.

We walked back in and she sat down. "I'm going to have you stand up this time," I said. "It'll let me see it hang down straighter."

I cut the offending small section. "Tip your head forward."

"Don't cut it so short you need to shave my neck," she said.

"No, I just want to clean up the bottom a little more."

I made a few more snips. "OK, that's it. As good as I can do without causing more trouble."

I lifted the cape over her head again and added, "It'll grow back."


A year ago on TTaT: The Outsiders
Posted by Claire at 8:41 PM 2 comments:

19. The Principles Of Pattern: For Craftsmen And Designers

19. The Principles Of Pattern: For Craftsmen And Designers by Richard M. Proctor


I read the hardcover version of this. Chock full of images demonstrating the basic pattern types and their arrangements: square, brick and half-drop, diamond, triangle, ogee, hexagon, circle, and scale.

It's not a how-to book, more of a things can fit together in all these different ways.

The selected bibliography in the back has some books I'd like to check out if I can find them.

The only thing that annoyed me was that he attributed a significant number of examples to "students of the author" while carefully attributing everything else.

Aside from that, there's a lot to be inspired by.

Email ThisBlogThis!Share to TwitterShare to FacebookShare to Pinterest
categories: books, life of art

This week felt slow going but was fruitful.

Shot 75 photographs. The fire from burning brush was a bust because the wood is still so wet and cold it wouldn't really catch. Got a few smoke images though. On other days created some snow and ice images.

Fine-tuned White Scrolling Curves on Black design and added it to my shop:

Watched How to Choose Your First DSLR Camera with John Greengo. Surprisingly informative.

Taken March 4, 2015. The banks of rock hard snow by the driveway were about 6 feet tall when these photos were taken. A little less snow now but nothing looks much different today. 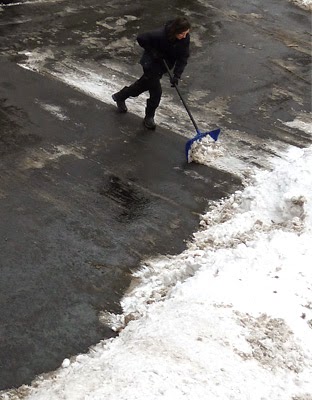 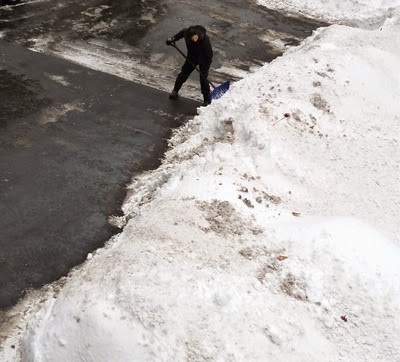 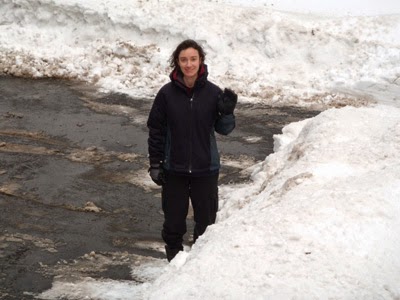 We had a few days that got above 40 degrees F, so I got a much needed haircut after those photos were taken.


4 years ago on TTaT: Life of Art SitRep #58 More inspiration from my closet
Posted by Claire at 7:15 PM No comments:

This week I added my first hand-painted design to my shop, which is to say a pattern I drew, painted, and then scanned to create a digital version of it. Rest assured I'm not abandoning my photography or digital designing, just incorporating some hand developed works into the mix. I enjoy the tactile creation.

Allow me to present, Hand-Painted Black Curvy Pattern on White:

Made new template sets for repeats. Much more time consuming than I'd anticipated. Does not make me look forward to the other sets I'll need to create down the line.

Reorganized categories a bit, gave images to fabric sub-folders so they’ll show up.

Worked on fine-tuning a pattern in Photoshop.

Two years ago on TTaT: The Veronica Mars Movie and How You Can Help Make it Happen!
Posted by Claire at 12:01 AM No comments:

Things That Go Thump In The Night

A large shadow reflection swept past the glass of the picture frame. BAROOM! The thick compressed snow and ice that had reached out almost three feet past the roof line (an unexpected quirk of the new metal roof) came down with a crash. The ground shook.

I hoped most of it would come down before I went to bed.

Just as I was falling asleep, CRACK! The sound of ice splintering on impact with the deck. That revved up my heart's pumping.

The night was punctuated with sporadic thunks to the back of the house and thumps to the front.

Here's hoping the rest of it comes down today before I go to bed.


Finished adding my photographs to the new Fabrics, huzzah! It's been a long process, but I've enjoyed exploring different repeat styles (block, half-drop, brick, mirror) and considering matters of scale. There will be more fabric to come!

Snow-covered Trees and Hexagons Fabric by RocklawnArts
Check out other Home decor Fabrics at zazzle.com

Puffy Clouds On Blue Sky Photo Fabric by RocklawnArts
View other Home decor Fabrics at Zazzle.com
Created another pattern variation and tweaked some others.

Started organizing fabric into categories though they aren't visible yet. Coming soon. If you have a preferred way you like to search for fabric, let me know. I'm still trying to figure out the best arrangement.

Updated files for end of month.

Two years ago on TTaT: Happy Ending
Posted by Claire at 12:01 AM No comments:

14. A Field Guide to Fabric Design

Lots of great info in this book, the basics of fabrics and patterns, tutorials for computer pattern creation and hand printed fabrics, roundtable interviews with designers.

This is one I'd like to add to my reference shelf.


Two years ago on TTaT: Batgirl, Vol. 1: The Darkest Reflection

Posted by Claire at 7:29 PM No comments: