Left to my own devices...

Left to my own devices...


...it seems really clear that I don't like to cook. I like the idea of cooking, but the practice? Not so much.

...I will wait until I'm hungry before I'll fix something. And then? Don't really care. In spite of everything I've read and heard about eating better quality foods, I still opt for fast and inexpensive.

...I will eat a bunch of baby carrots with most every dinner. That's something, right?

...my default mode is work while it's quiet and I'm free of interruptions and distractions.

...I am a recluse. If you exclude typed communication, I didn't speak to anyone for 4 days, probably 5 if you went by hours.

...I think I could crush a silent retreat.

...I will workout everyday. It's really not as impressive or crazy as it may sound, but it is pretty consistent. Some easy yoga and mobility stretches each morning with rare exception. Bodyweight strength training about twice a week. Various other mobilizations usually while watching tv at night. Short walks several times a week.

...I will wear t-shirts and black cargo pants most days. (I do this left to my own devices or not.)

...I will revel in all the small considerations I do not need to do. Most, though curiously not all, of my politeness takes a break. If I burp, I'll still say, "Excuse me," even if it's just to myself.

What do you do when left to your own devices?


4 years ago on TTaT: One of those days
Posted by Claire at 7:36 PM No comments:

Watched parts of Creative LIVE's Photo Week: Travel Photography with Andy Katz, NIGHT PHOTOGRAPHY: NO LIGHT? NO PROBLEM! WITH MATT HILL, and last segment of image critique with announcement of winners with judges.

Did a variety of tidying in the back end of my store to simplify it.

Now trying to decide what's next. How was your week?


4 years ago on TTaT: Context is everything.
Posted by Claire at 12:01 AM No comments:

A few days ago, I posted this on Twitter and FB:


My birthday cake had a candelabra on it. I approve! Also, yum!

Cheryl suggested I write a "Behind the Candelabra" post.

So here I am, literally behind the candelabra: 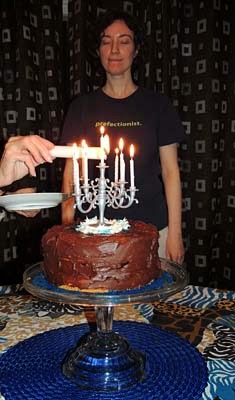 I am endeavoring to not drive myself crazy with all of the things I would fix in this photograph. Fitting that I'm wearing my "prefectionist" t-shirt.


Two years ago on TTaT: Say Something Nice
Posted by Claire at 7:41 PM 2 comments:

Do any businesses exist that use automated phone message systems that do *not* say, "Our menu options have changed"?

Because, FYI, I do. not. care. and it makes you sound like you don't have it together.

You know what I do when I know the menu number to press? I PRESS IT. BEFORE YOUR WHOLE DAMN MESSAGE PLAYS.

And you know what happens? It's usually fine and if it's not? They just transfer me to the right department.

So spare me that 2 wasted seconds every time I don't know the menu number. When you consider the aggregate of all the people who call you, that's a lot of time wasted.

At least re-record your message when the options haven't changed for weeks or longer. Please?

Look, I get it. No one in the office likes recording the phone message. Write out a script and you can pay me to do it. I have a nice, clear speaking voice and good editing skills. Your message will be concise once I'm through with you.

This week, I shot 39 photographs of wild cucumber, flowers, and birthday cake.

I created 6 templates each for 2 iPhone 5C cases, an iPhone 5/5S Graft case, wrapping paper, and 2 iPad cases. Also made a folder with all the images I use for templates to make them easy to find. Why didn't I think of that sooner?

Then I started adding all of those products plus an iPod Touch 5G case to the existing designs in my shop. I finished all of the chevrons, gingham, and bisected lines patterns. Tallyho!

I'm really excited by how my chevrons patterns translate into wrapping paper. Observe:

Rainbow Bullseye Cover For iPhone 5/5S by RocklawnArts
Shop for additional covers for the iPhone 5S at Zazzle
Many more of these products to come! (As well as other cases not pictured.)

Also watched parts of Creative LIVE's Photo Week: SELF-PUBLISHING WITH BLURB WITH DAN MILNOR, THE 90-MINUTE ROADMAP TO COMMERCIAL PHOTOGRAPHY WITH ERIK ALMAS, listened to and watched bits of Finding your Inspiration: Fine Art vs. Fashion with Brooke Shaden and Lindsay Adler, REAL ESTATE PHOTOGRAPHY WITH MARC AND TIFFANY ANGELES, and DIY LIGHT TABLE WITH ANDREW SCRIVANI. (Apologies for the all caps, I don't have time or patience to retype them all.)

Photo Week is LIVE now and continues through Saturday.


5 years ago on TTaT: Digging deep into the archives for this one, playlist: BIRTHDAy, part 1
Posted by Claire at 4:25 PM No comments:

With the advent of cooler weather, you may decide to remove your window air conditioner. If so, be prepared for two things first:


1. Your a/c may be full of water that will pour out as soon as you pick it up. Have towels handy!

2. Spiders, man. They love summering above your a/c in the nooks of your window. Psych yourself up and have some paper towels ready for squashing if you've got some runners.

Bonus tip: Find someone to give you a hand. It's easier if one person can manage the a/c while the other contends with spilt water and arachnids.


Two years ago on TTaT: Life of Art SitRep #84 ROYGBIV take two
Posted by Claire at 2:18 PM No comments:

Email ThisBlogThis!Share to TwitterShare to FacebookShare to Pinterest
categories: tips

But in this case, actual thunder and lightning. Quite a bit of it this week and quite close at that. The chances may be small (or not, I'm not really sure) that my computer will get fried in a lightning strike, but I do know I don't want to buy a replacement computer right now. So when it gets rumbly, I shut down and unplug. All this is to say I didn't get a whole lot done this week.

On the upside, my current iPhone 5 cases will also fit the iPhone 5S making them iPhone 5/5S Cases.

iPhone 5C cases are being added by auto-migration.

Re-profiled the color of my display.


3 years ago on TTaT: Favorite semi blurs
Posted by Claire at 2:41 PM No comments:

You might know them better as Perry and Della. That is, Perry Mason and Della Street.

I used to watch reruns of the original Perry Mason after school. I was somewhere between 4th and 6th grade.

After my parents told me that artists are poor when I was in elementary school, I decided I wanted to be a lawyer. I wanted to be like Perry. His clients are always innocent and Perry always wins his case (except maybe for 1 episode).

In 6th or 7th grade, we did a mock trial relating to the Boston Tea Party in my Social Studies class. I got to be one of the lawyers and thought I had it nailed because historically, my side won. But my opponent was the most popular boy in my class and there were 3 boys on the jury and 2 girls.

After we finished the mock trial, our teacher did a show-of-hands poll for which side each of us thought should have won. All but one not-so-bright guy raised their hands to indicate my side should have won. Even the boys on the jury who'd minutes before voted against my side now voted for it.

After that sexist display, I was done with wanting to a be a lawyer. Naturally, my opponent became one.

Anyway, after all these years, I stumbled across late night reruns of the original Perry Mason as well as some Perry Mason TV movies that were made in the 80s and early 90s. I think the latter may have been on the Hallmark Channel. Some are better than others but I could listen to Della and Perry's voices all day long. Barbara Hale's voice has only gotten better with age and Raymond Burr's sounds as strong as ever.

Email ThisBlogThis!Share to TwitterShare to FacebookShare to Pinterest
categories: film and tv

The process of deleting auto-generated phone cases continues. I'm reluctant to post new stuff because I don't want it intermingled with the hundreds of products I end up deleting because they already exist in my store. So far I have managed not to delete anything I didn't want to, huzzah! I do hope it doesn't take all month for this migration to cease.

Otherwise, I did the usual posting to promotional blogs that I do.

I've also been learning about some strategies I may be able to put into use but am not ready to talk about yet.


Two years ago on TTaT: Just Kids
Posted by Claire at 12:01 AM No comments:

OK, I'm awake. My eyes were still shut as a steady stream of loud thunder continued. Good thing I clipped my curtains shut or it'd be lighting up everything.

I'd recently started adopting some steps to improve my sleep including blacking out my windows. I'd also stopped looking at my clock when I woke up in the night since that does nothing but stress you out about not getting back to sleep. (Ideally you're supposed to unplug it entirely, but I still need mine during the day.)

Well in this case, I don't see why it would matter since I'm not falling asleep again until the thunder stops. I opened my eyes. 2:48 AM. Great. 2 hours of sleep.

BOOM! That sounded really close. Might be a good idea to see how close.

Though my curtains are navy and do a good job of blocking light, there are some small gaps between the tabs that hold them to the curtain rods.

I kept watching the tabs and rapid flashes. It got hard to tell which thunder went with which lighting. I counted 5 and 6 seconds which was better but still nearby.

Too bad there's no clear view of the sky here, this would be perfect for photographing lightning.

A heavy patter of rain started to fall. That's usually a sign the storm is moving off.

The thunder gradually lessened in frequency. Instead of every few seconds, a minute might pass, or two.

Finally it was quiet for a few minutes. Is that it? I wondered.

Not yet. I focused on my breathing but it was already pretty calm. My heart wasn't racing so that was something.

The booms and rumbles faded out eventually and I drifted back to sleep.