My mood tends to be foul and unforgiving when someone awakens me unbidden. This fact is well known in my household. When I heard my doorknob turning that morning, I thought, I already said I'd get up earlier today. I was going to get up in another 20 to 30 minutes anyway. What. Do. You. Think. You're. Doing?, as I fixed my murderous glare on the gingerly widening gap.

When she saw that my eyes were already open, she said the only word which could ensure instantaneous and complete forgiveness: Bears.

"Where?" I threw off the covers and got out of bed.

"In Joy's yard, coming towards ours."

I followed her out into the hall and went into the next room to look. With my adrenaline rush, it was amazing I didn't stub my toes on any of the piles on the floor.

Two Bears! A mother and cub. They were heading towards our yard and at a good clip. When they disappeared behind the shed, I called out, "Camera!" like a surgeon ordering a scalpel and ran to the office for a better view.

She handed me the new digital camera and said, "Do you know how to use this one?"

I'd taken a handful of shots with it once 3 months ago. "Sure." She took another camera and left to get a vantage from the next room.

I set the camera down on the desk, unlocked the window, and pushed up. It didn't budge. The bears were in our yard, and I couldn't get the window open. I didn't even know how cold it was outside; it'd been in the low 30s recently, but I didn't care because I was determined to get clean shots. I was leery of startling the bears with noise, but there was no helping it. I yanked down on the window to break its seal and then gave it a frantic shove up. It opened enough that I could get my hands under it and lift it out of the way. The bears were unperturbed.

I looked for the spring-loaded latches at the base of the screen, but it didn't have any. I couldn't see anything to grab, so I reached up under the glass, found the top of the screen and shoved it up. Fortunately it wasn't stuck. I got my hands under it, and pushed it out of the way. It was a sunny 40 degrees out, so it felt pretty nice.

I picked up the camera, found the on switch. Held it up to my eye, but didn't feel the shutter release. Lowered it, found the button, lifted it up again.

Then I leaned out the window and started snapping shots, afraid that I was going to drop the camera or that all of the shots would be blurred because of my adrenaline. 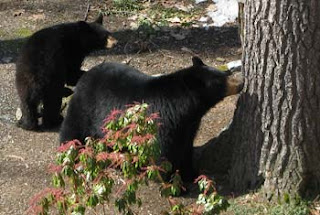 After sniffing around the tree with the cable to lower the bird feeder, Mama bounded towards the house. Even though I was safely hanging out of a 2nd storey window, I was nervous. What if she climbs the stairs to the deck? 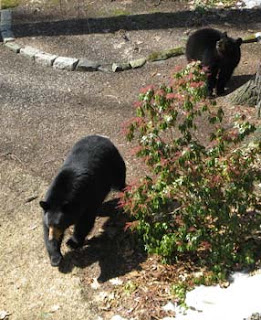 "Where'd he go?" hollered a voice from the next window over.

"She's under the deck." I fought with the zoom lever to get a closer shot of the cub, waiting just where Mama had told her to.

"There she is. At the base of the stairs," I amended when I caught sight of a bit of Mama's black fur.

The camera beeped ominously as my palm hit a button on the back of it. Damn, what did I just do? The view screen had activated, and I couldn't easily tell how to turn it off, or if I'd done anything else, so I ignored it and hoped that I hadn't switched to macro mode or something else that would ruin my shots.

Mama walked back into the yard, stopping to inspect a sculpture made out of record albums stacked on a spiraling wire. Then she signaled to her cub that it was time to go, and they jogged around the side of the house. 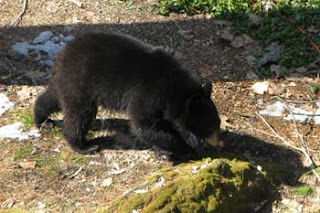 I ran back to my room, jerked up the blinds and took a few shots through the window as they crossed the street and disappeared into the trees beyond our neighbor's yard.

From first to last of the 33 shots I took, only 3 minutes and 2 seconds elapsed according to the time stamps. Probably less than 6 minutes from the moment I heard my doorknob turn. Felt longer.


A year ago on TTaT: Turkey Invasion
Posted by Claire at 9:11 PM