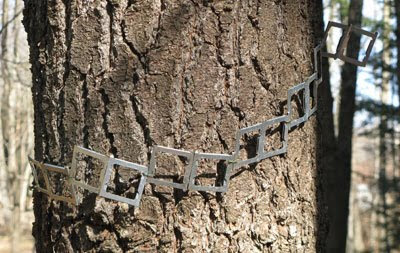 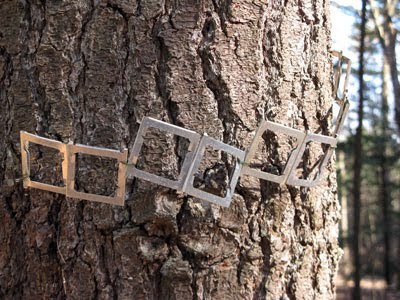 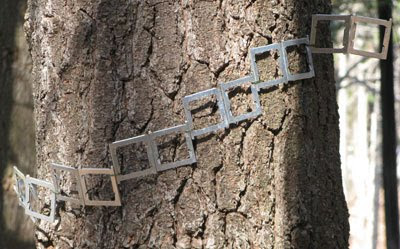 A while back, my Dad was weeding his immense slide collection and he was going to throw out all these metal slide holders he had. I couldn't resist the modular stack, so I had a pile of them for a while and then started interconnecting pairs and then wired those together.

For a long time, it hung vertically from a hook on the door to their garage.

One day when I was over, I noticed it was gone and then spotted it outside where Mom had nailed it to a tree.

It reminds me of this modular sculpture I made in college. The modules I used for the project were hinges with screws arrayed in an undulating pattern along a diagonal to show acceleration that met with another line of hinges and screws representing constant speed all mounted on a piece of wood. (I'll take a picture of it sometime if you're interested.)

Anyway, the point is, my professor looked at it lying flat on the table, liked the screws hanging off the side, and then tipped the whole thing upright making it about 1000 times cooler.

Slide holders wrapped around a tree instead of hanging straight = much cooler. Thanks, Mom!


Three years ago on TTaT: Je souhaite
Posted by Claire at 10:06 PM