To Be King Again

Browsing DVDs in Costco, I picked up Battlestar Galactica: Razor. I stared at Admiral Cain aka Ensign Ro on the back cover, her posture triggering a memory of being king.

"Pull your shoulders back, and thrust your breasts out like cannons," Andrew said.

Freshly 17, I glanced at our 20-something director and started laughing so hard my eyes watered and I had to put my hands on my thighs to prop myself up. That he was completely serious made it sound all the more outrageous. My reaction was mitigated because he was gay, but knowing I was being scrutinized made it even harder to overcome my self-consciousness.

I was to be King Philip of France and my friend Samantha, King John, in the worst Shakespeare play ever (at least out of the 15 or so that I've seen, read, or performed in): The Life and Death of King John. It was a miserable choice for a high school production, or anyone's really, but the theater company that supplied our directors liked to experiment with us.

We actually had several boys in the cast, in part because my Humanities teacher, Hurles, coerced his male students into auditioning to stem a boy shortage. Nevertheless, Sam and I were made kings despite our sex. We were taller than most of the boys anyway.

A few weeks of rehearsal later, I was walking down a hallway, chatting with Hurles. He pointed out that my kingliness had seeped into my everyday life. I raised a quizzical eyebrow at him. 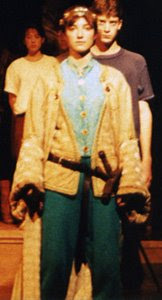 Standing tall for the prologue
(Yes, the play is such a mess we added a prologue.)
"The way you've been walking around here lately, you look as if you're going to beat up anyone who gets in your way."

I gave him a friendly shove on the shoulder.

And then he careened almost into the wall.

Then there was panic. I did not push him that hard. ... Did I? Clearly I'd just unintentionally crossed a significant teacher/student line. With the zero tolerance rules of some schools today, I'd probably have been suspended or expelled. Fortunately, no one else was around and he laughed it off as proof of his point.

There was truth to it. I didn't realize it until he mentioned it, but I had adopted Andrew's king posture full-time. It was more than the posture however, through it came confidence. 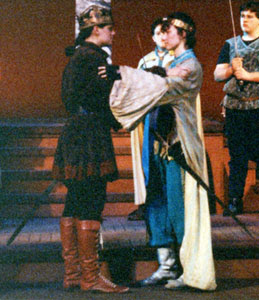 A greeting of kings. The swords weren't just for show.
(Time for another retrovlog?)
It'd be nice to be king again. Shoulders back, breasts like cannons, ... and carrying a sword for good measure.


A year ago on TTaT: Bricks on the brain
Posted by Claire at 7:03 AM