Things I learned while on vacation: 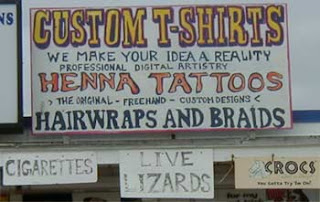 In my experience, all US Eastern seaboard beach towns with a boardwalk are the same: miniature golf, tacky tourist shops, arcades, rentable bikes. They are the land of 10,000 t-shirts, most of which are designed to be opinionated if not offensive to someone while the rest advertise the beach town. The main difference is how warm the ocean water is (or isn't).

"Nattering on" is a totally accurate way of describing my 4 year old niece's speech. It's not a word I'm sure I knew before I heard my bro and SiL use it, certainly not one I'd think to use in conversation much, but it suits Little Red. She talks pretty much constantly whether anyone's paying attention or not. Since it's non-stop, you sort of do have to ignore it eventually to hear anyone else. The amusing thing is that my brother talks pretty much non-stop himself, going on at length about any and every topic with authority (assumed or actual). Can't say I'm sure Little Red's chattering is just a phase considering. We'll see. Might be some karma coming round there.

Am I a hypocrite if I won't eat at Hooters because I find it offensive, but I did eat at the Brass Balls Saloon? None of the wait staff (male or female) was scantily or revealingly clad, so I'm going to say no.

I definitely exhibit a bit more OCD behavior when I'm traveling which is not surprising if you consider repetition a means to seeking out assurance of something in an unfamiliar environment. E.g., is everything I usually carry in my pockets there, or has something fallen out? Sometimes things do fall out, so it's not an unfounded concern, but I checked all my pockets so many times while walking down the stairs at the Tut exhibit that Mom asked, "Did you lose something?" 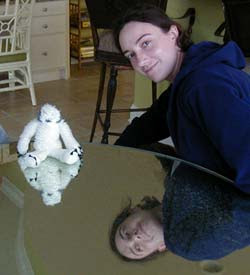 After hearing it enough times, Tiki Charm seems like a perfectly reasonable name for the ice monster from Hoth.

Being on this vacation reminded me of past dual-family beach vacations. I never quite fit in because my bro and cousins were all boys and all older. Now, I still don't fit in, being an adult but unattached, not into sunbathing, swimming, or junky beach stores. 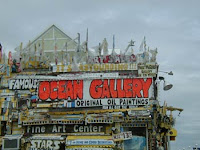 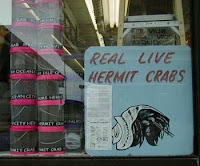 I do like watching the surfers though. And the waves through the glass doors to the balcony.


SPFs 50 and 55 diligently applied proved effective at keeping me tan-free throughout a week at the beach.

Hangin' with wild ponies is kind of awesome. 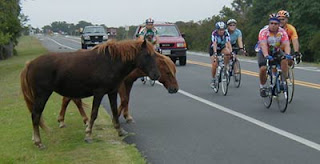 Some are unexpectedly friendly. 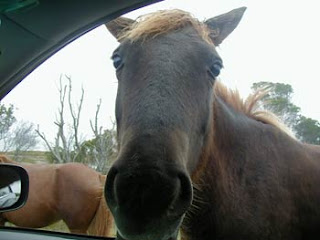 Some know how to model. 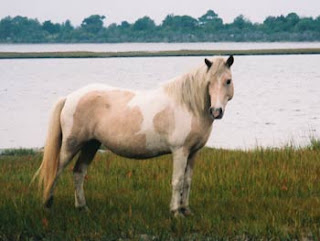 This one would walk three steps, stop, and strike a pose, then do it all over again.

Royal Farm is a very cool gas station, food stop. Mini-mart doesn't do it justice at all. It has one, but it also boasts fresh, fast foods. Picked up a pasta salad, Naked blueberry/blackberry smoothie and some pretzels for a late lunch snack. Could've gotten all sorts of breakfast sandwiches (available all day), or burgers, chicken, salads, just about anything- all made to order. Damn cool.

Some places on the boardwalk stay open later or open on the weekend when it's off-season. Some close up shop at the end of September and stay closed until the following spring.

Dexter is odd and funny.

The first time you select your difficulty level in arcade DDR Supernova, it doesn't actually set it. Technically, I figured this out after vacation as I couldn't figure out why it was forcing me to play the beginner level. So unsatisfying to play when the steps are spaced out so much, but I did score high enough to put my name on the machine twice (which stunned me since my scores weren't impressive). Maybe they cleared the top scores at the end of the summer or it keeps discrete top scores lists for different difficulty levels. Still, that should go on my Dave2-inspired list of stuff to do before I die that I've already done: scored high enough to put my name on an arcade machine, DDR no less- check.

Two years ago at TTaT: Miscommunication, From my other life
Posted by Claire at 4:20 PM