The most officially athletic I've ever been was when I was in the 7th grade. I joined the cross country ski team with some friends. They were all in better shape since they'd been on the cross country running team in the fall, but I stuck it out anyway.

The town I lived in was so small that the team included members from 7th through 12th grade. Even 6th graders could join though I don't remember there being any that year. My brother, four years older, was also on the team, though he was less diligent about attending practice than I was. My devotion kicked in as soon as we had enough snow to ski on; I never did care for running, and it was kind of depressing because everyone else was faster than I was. 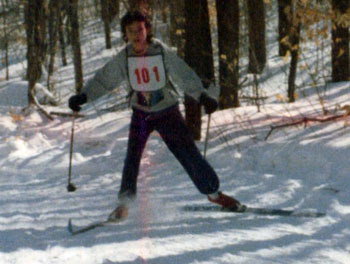 The freestyle nordic skiing so common now was just gaining popularity at the high school level. "It's just like ice skating," coach told me.

I could feel my face burn as I said, "I've never been ice skating."

"It's the same as roller skating."

I shook my head. I had roller skated before, but I was by no means proficient at it nor did I understand how to transfer that knowledge to skis. At least I wasn't the only one; my classmate Tom needed help with it too. Ultimately, coach gave up describing it and had Tom and I follow Jason, a classmate who knew the technique and on whom I had sporadic crushes, in a short loop over and over while the rest of the team went on a long training circuit. It was both edifying and mortifying.

It was a strange season. My mom threw out her back so badly that she was essentially bedridden for a couple of months. Dad and I took over Christmas shopping for the extended relatives. Mom didn't make it to a single race during the season. My dad went to them all but never thought to bring a camera.

There was no separate race for JV, you just started in the later waves. Though I'd ride the bus to the meets with the team (we'd sing along to Weird Al's "George of the Jungle" on someone's boombox), I rode home with my Dad. We had things to do and no one missed me. I never felt like waiting for all the times to come in because by the time I crossed the finished line, which team won the meet would already have been decided. Usually us, just for the record.

Our home course was a town park with trails covering a mountain, one of the most difficult courses in our county. Our coaches would hang by the entrance and tell us to ski various laps. Even now I can picture one downhill that had a tree embedded in it making a bit of a jump if the snow wasn't that deep.

There was also the shortcut to one of the major laps they'd tell us to do: Redneck Run. I can't imagine it's actually named that, but that's what we called it. The trail looked like a V; if you skied the steep downhill fast enough, you could get nearly all the way up the uphill section, as long as you managed the slight turn at the bottom. If you missed it, you'd run into a tree, and people did. I never hit that tree though I did hit another somewhere along the line. Skis bend more than you might expect.

One day, I didn't have a ride home from practice but the far side of the park ended at the top of the huge hill across from my house, so I decided to ski home. My brother and I had sledded on that hill many times. There was a steeper drop about 7 feet high into a gully at its bottom which usually kept us from sliding into the street if we hadn't already bailed out. About halfway up the hill, there was a small hill protruding from it like a jump platform.

As I stood at the top, backpack strapped on, in my cross country skis (longer, narrower, and with less edge than downhill skis), I considered the very crusty snow. I wouldn't be able to turn much, if at all, once I started down. All I wanted to do was avoid the small hill in the middle. I aimed myself super wide of it and started my descent.

And started curving towards the jump in spite of everything I tried to do. I flew over it and landed face first in the snow with the tips of my skis in my stomach. Got the wind knocked out of me but was otherwise, miraculously, unhurt.

Our boys and girls teams were county champions that year and state champs pretty much every year after that until I graduated. Part of that was due to a dynasty of brothers: all four of them won state champion titles at least once. The eldest brother even made it to the Olympics, competing in the classical race. He wasn't a medal contender, but I'm still so proud of him and think it's super cool that I was on a team with a future Olympian.

Even though it's been many years since I've skied, watching the racers skate across the snow yesterday, I could feel their movements in my body. Without thinking, I knew which leg I favored with the poles: left. It sucked me in all over again. Go team!


Two years ago on TTaT: Bridging the Gap
Posted by Claire at 4:48 PM