The Road is my Favorite Place: Day 10

I hate low shower heads. The shower head at the Concordia Days Inn was particularly low. However, despite the irritating start and unappealing weather, the day was pretty entertaining. I was in the "Show Me" state and indulged in a few roadside attractions. I grabbed a quick bite at Subway in Kingdom City before checking out Ozarkland and its red sparkling roof sign. 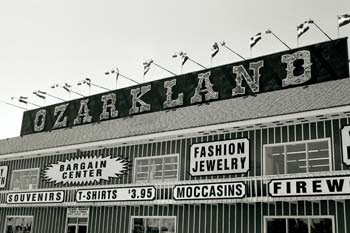 What an impressive array of junk! Cheap jewelry, moccasins, fireworks, t-shirts, knives, wood crafts. They did have some cool metal Harley signs though and a computer with free internet access. Finally a chance to check and send some email. 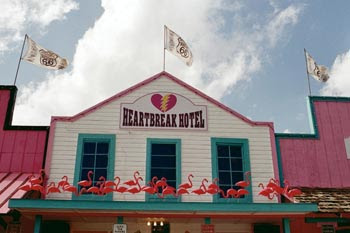 The same highway exit boasted Nostalgiaville, home to an impressive selection of memorabilia and collectibles: novelty signs; vintage signs; Superman, Batman and Wonder Woman lunch boxes, banks, and notebooks; posters, magnets, mugs, Elvis, The Wizard of Oz, Betty Boop, Marilyn Monroe, poodle skirts and more. I bought a Mustang sign for a friend and some other trinkets for stocking stuffers. 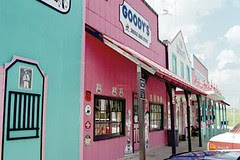 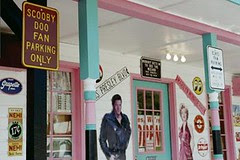 Outside, I took some photos of the place. My California tags caught an old guy's interest before he walked inside. It was another amazingly hot day. It was so humid my nostrils burned as if I was trying to breathe underwater. I'd thought about hitting the zoo in St. Louis later but nixed the idea.

Back on the highway, I passed several beautiful watering holes: blue water with little wind ripples. Then I caught up to the storms again: lightning, dark skies, and heavy rain. Around 5, I was close to St. Louis; it was raining so heavily it was hard to see in addition to being rush hour, so I stopped at a Bob Evans for dinner. There was no wait (yet again), so I was out in half an hour. On my way to my car, I felt a couple of large raindrops, got in, and then it started pouring again. Hmm, stay or go. It was further into rush hour at this point and was actually raining heavier, so I decided to wait a bit.

5:54P Well my car's getting a serious bath. Windy too. Geez it was clearer before I pulled off. Now there's lightning too. I will wait. Damn- this wind is rocking my car. That's a bit nerve racking. Tornado? I see how it picks stuff up now. Blah. Maybe I will just stop here. Can't tell which way this is blowing.

A bit later, the rain finally eased up, so I got back on the highway. Two complete rainbows, one above the other, were visible. I was used to seeing pieces of arches but couldn't recall having seen two with both ends reaching the ground before.

In St. Louis, I parked in a lot by the waterfront and walked to see the Gateway Arch. I took some shots of this bridge along the way. The lower level of it was for trains while the upper part was for motor vehicles. 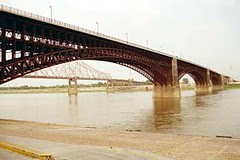 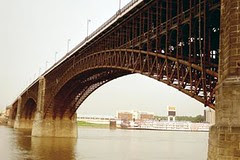 It was well after seven when I reached the Gateway Arch, and I still had further to drive to find somewhere inexpensive for the night, so I didn't take the tram ride inside or check out the museum beneath it. I was content to enjoy the shape and scale of the arch and the post-storm magic hour light awash over the city. (The photos were shot with color film and are unaltered.)

Crossing the river, radio stations went from K to W. I stopped in Troy, IL not far over the border and discovered that my cell battery was not low, there were crickets in my room. I was really tired but they wouldn't shut up, so I listened keenly, tracked, and caught them. There were two and I squished them between motel plastic cups. I'd wanted to let them go, but motel windows don't open and I was already in my pajamas. I mentioned I was tired, right? No plus karma points for Claire.

At 5:45 AM, I was awakened by The Tell-Tale Cricket, outside I think, but loud.